by Mark
Last week I attended the 'Making Liveable Cities Conference' in Brisbane. A noticeable tension was the focus on cities while a significant proportion of the presenters came from regional Australia. The subtle shift in focus for the conference was set by the opening keynote speaker, futurist, Peter Ellyard. Peter had an impact on me more than a decade ago with the concept of, 'just enough, in place, in time'. This principle has become part of the ethos of our firm informing how we communicate, document and design. [caption id="attachment_3380" align="aligncenter" width="717"] 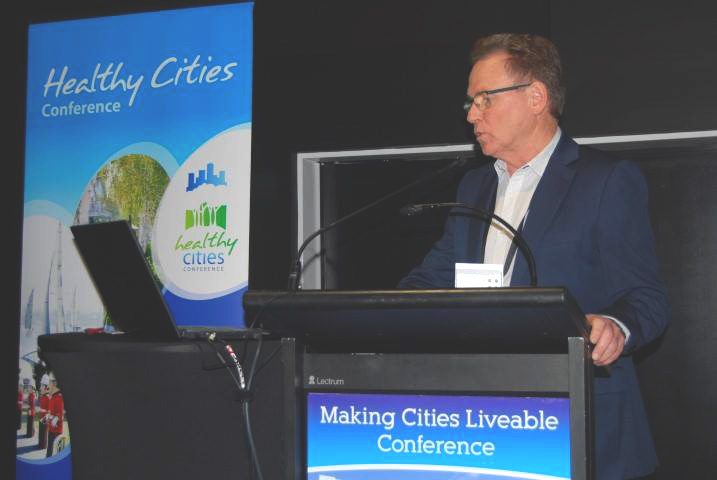 Mark Jones delivering his speech at the 10th Making Cities Liveable Conference[/caption] Peter Ellyard argues for 'planetism' as an appropriate worldview. He cites the recent G20 Summit where members were asked to reaffirm their support for international efforts to fight global warming. 19 counties voted for the planet while one, represented by Mr Trump, voted for the nation. For Ellyard, this is the era of interdependence - not independence. He advocates six pillars for liveability. Communities (not just cities) should be prosperous, harmonious, inclusive, sustainable, healthy, and secure. He argues that we need to shape the future noting that “imagination is to the future what memories are to the past'. Peter proposed 6 tools necessary to shape the future: leadership, management, planning, design, innovation and learning. Recurring themes throughout the conference were the positive contribution made by community consultation and engagement; local government learning to facilitate rather than frustrate; urban planning by the people; and the diversity that contributes to the richness of this great country. My talk about our initiative for an age friendly Illawarra resonated with these themes and reinforced the benefit of a regional strategy. In the closing session the facilitator had an epiphany! "Perhaps next year it should be about cities AND towns". My spontaneous applause to this comment was greeted with support from the audience and I trust that the conference in 2018 takes a more balanced approach to the diversity that makes up our great country.