by Mark
The Australian Government has shone a light on the impact of our ageing population. The updated Intergenerational Report released yesterday foreshadows that over the next 40 years the proportion of the population over 65 years will almost double to around 25 per cent. This has prompted a call for a nation that is 'age friendly' and one that is more socially inclusive of our senior population. Edmiston Jones has long championed a less ageist community. Partnering with IRT Foundation we sponsored an interstate tour with past World Health Organisation Director, Alexandre Kalache, and this kicked off the idea of promoting an Age Friendly Illawarra (refer to our blog Australia's 1st Age Friendly Region) The partnership recognised that city centric solutions do not always transpose to a regional context. The Age Friendly Illawarra Alliance was formed and now, after months of enquiry and research, the AFIA Steering Group includes the Joint Organisation of Councils, Healthy Cities Illawarra, Family and Community Services and the University of Wollongong. The Alliance is committed to the vision that people in the Illawarra aged over 65 years are enabled to lead active, engaged lives and contribute positively to our community. [caption id="attachment_1891" align="aligncenter" width="640"] 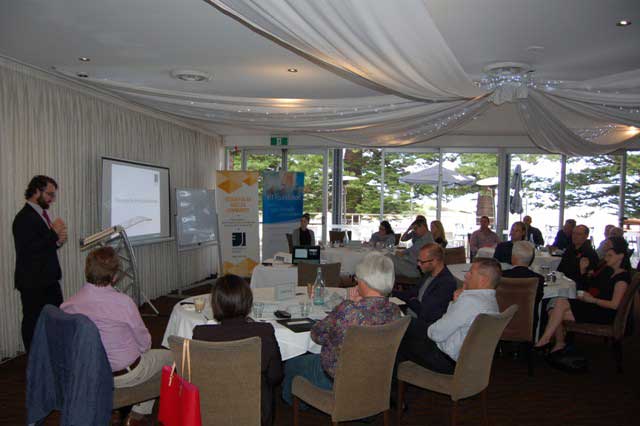 Toby Dawson speaking at our previous forum 'High Density Living for Boomers'[/caption]Following the successful High Density Living for Boomers event challenging developers to rethink high-density developments as communities catering for the aspirations of older people, Edmiston Jones and IRT Foundation join forces again to host the  provocatively titled workshop, Leaving the Village. The workshop will challenge traditional notions of retirement villages and ask whether they inadvertently create segregation at the expense if integration. My interest comes from very personal experience. My 89-year-old father lives in a self-contained unit within a retirement village. Even in this context, he became socially isolated leading to depression and a bout in hospital. Fortunately, this was a turning point where the need for additional services was recognised and in-home care, together with meals on wheels, has become part of his daily routine. The local pharmacy plays a key role. They package his medical supplies and with the delivery also bring genuine care and engagement. If it takes a village to raise a child it seems that it takes a community to care for our senior population. If you would like to join us at the Leaving the Village workshop, click here to register.