by Mark
The University of Wollongong’s SMART Facility recently hosted two of the world’s leading researchers of the global trend to urbanisation, Professor Amal Kumarage and Professor Nick Tyler to discuss what the Illawarra might learn from emerging countries. I chaired the discussion representing The Property Council of Australia, Illawarra Chapter. It was a privilege to take part in the SMART panel. Fellow panellists, Nick and Amal shared insights with examples of other cities around the world. I was pleased to give a local perspective looking at the challenges and opportunities faced by Wollongong. Learning lessons from emerging cities such as Bogota, Columbia and countries such as Sri Lanka seemed counter-intuitive, however the discussion emphasised the obvious – cities are for people and urban design should be informed by their citizens. The panel was timely as it coincides with the release of 'Public Spaces Public Life – A City for People' by Wollongong City Council. The document proposes principles for a human scale city that offers a rich diversity of experiences. 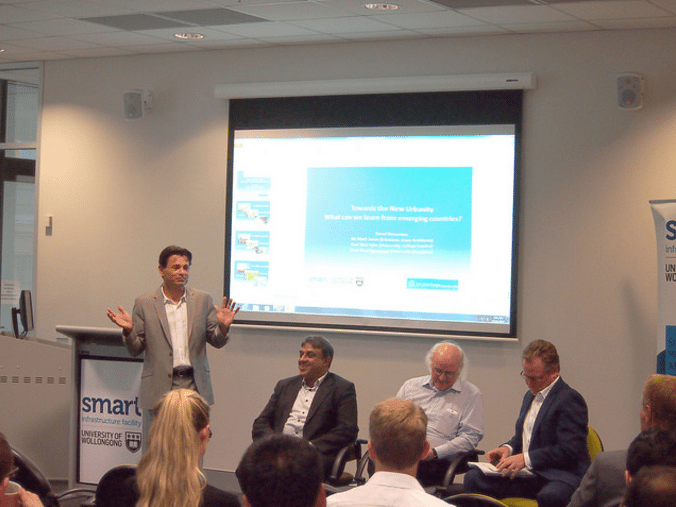 The discussion highlighted a key issue in implementing and adjusting to the changes inevitably brought by urbanisation. The nexus between strong leadership and an actively engaged community needs to be managed. This juncture is often thwarted by bureaucracy however solutions must be “bottom up – as well as top down.” The challenge! How do we maintain community with increased concentrations of the population? Without strong communities, citizens do not have the platform to make a balanced contribution to planning our growing cities. SMART’s Director, Professor Pascal Perez, summarised the proceedings noting, “Our speakers convincingly argued that urban systems need to be thought through as agents of social change rather than mere infrastructure artefacts. Ribbon-cutting strategies are far less productive than direct engagement with local communities as people make cities work or break them down.”