Waste Not Want Not – Boro Textiles

by Mark
It took a trip to Portugal to gain an insight into an aspect of Japanese culture and an appreciation of the 500 year history linking these two countries. An exhibition at Lisbon’s Musea Design Moda presented Japanese boro textiles - the traditional recycling, reuse (and respect) of handmade fabrics. The Japanese idea of perfection differs from western aesthetics in that irregularities and flaws are often core elements that elevate an object from the ordinary to the extraordinary. In this tradition wabi sabi is a complementary point of view that values the impermanent and imperfect nature of objects recognizing that beauty is revealed over time and through thoughtful observation. A related idea is mottainai, an ancient concept central to Japanese culture, which cautions not to waste anything and is a driving force in the aesthetic of boro textiles.  The term boro is roughly translated as ‘tattered’ and defines a genre of indigo dyed textiles ingeniously patched and mended from the mid 18th century to the mid 20th century. While historically the textiles were the product of frugality and necessity, today boro is appreciated for its aesthetic appeal.   It is a timely reminder of the importance of recycling used materials and retaining skills sets that can repair rather than the contemporary default to ‘replace’. [caption id="attachment_1048" align="alignnone" width="341"] 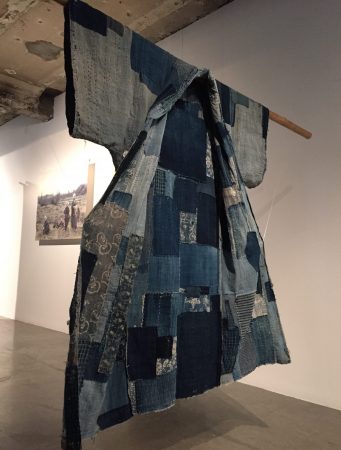 indigo dyed textile patched and mended[/caption] The current Sourcable, an architectural e-magazine, features an article on Swedish denim company, Nudie Jeans, which recycles used denim.  The company up-cycled 2,700 pairs of jeans to create a limited run of 250 unique foldable camper seats and 350 rugs.  Nudie Jeans set a great example having already shown commitment to environmental initiatives by offering free repairs to ensure otherwise wearable jeans will not be discarded as well as DIY repair kits to promote the longevity of its products. The Edmiston Jones team are taking a small step in raising our awareness of the amount of material that is discarded as a response to western excess and changing fashions.  For the second year running, Christmas presents between team members are purchased from an Op Shop.